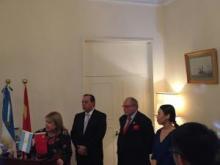 On Wednesday, May 18th, with the presence of the Minister for Foreign Affairs and Worship, Susana Malcorra, the Tourism Minister, Gustavo Santos, high authorities of the chinese government, scholars and personalities from the cultural sphere, and ambassadors of the diplomatic corps, the Ambassador Guelar formally launched the "Smiling Beef Club".

This is the fancy name of the event to be held regularly at thep remises of the diplomatic mission to celebrate friendship between Argentina and China; the Club Counts among its members the most outstanding exponents of politics, business, culture and journalism, gathered around the Argentine barbecue and Malbec wine.

On the occasion, the Ambassador Guelar welcomed the Minister Malcorra and Minister Santos, and expressed the need to submit to the various levels of the Chinese government and the business sector an articulated message regarding the continuity and deepening of bilateral relations between Argentina and China.

"Today, with the presence of the Chancellor and the Minister Santos, and taking into account the relevant messages that were offered in the context of their visit to China, we can affirm that the transition period between the previous and the current Administration has been completed, in regard to the continuity of investment projects and the link between the two countries In general," said the diplomat. "I had the opportunity to deliver this concept to President Xi Jinping on May 17th, when I submitted my credentials, and I believe that the message was well received ," he added.

For her part, the Minister Malcorra referred to meetings held with Chancellor Wang Yi on the morning of May 19th: "I am convinced that these days we're going to seal the fate of a serious, mature and predictable relationship. I know that in the beginning there were doubts in some media, but this was the definition of the Government of President Macri from day one. We are looking forward to work together with my friend Wang Yi some relevant topics, such as investment and flexibility of the system of visas to chinese tourists, among others”.

In connection with the promotion of tourism of chinese citizens to the Argentina, Minister Santos invited those present to visit the country, tell the main tourist attractions of our country, and referred to Argentina as "the homeland of Pope Francisco and Lionel Messi," which sparked the applause from the audience.

Attendees, including businessmen linked to the importation of food and beverages – had the opportunity to taste our signature wine strain, as well as various cuts of meat.