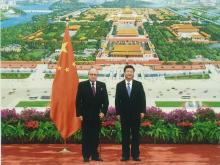 On the afternoon of May 17 th, the Head of Argentina's diplomatic mission in China, Diego Ramiro Guelar presented credentials to President Xi Jinping in the Palace of the people in Beijing.

On the occasion, the Chinese President expressed his satisfaction with the diplomat regarding the state of bilateral relations and recalled the important meeting with President Mauricio Macri in Washington last April 1st. Xi also referred to the high expectations of his government for the visit of President Macri to China in September, for the G20 summit.

For his part, Ambassador Guelar conveyed that Argentina will continue to deepen the Comprehensive Strategic Partnership between the two countries and that the "transition period" between the previous and the current administration has concluded. In addition, he recognized the understanding and flexibility showed by both the chinese authorities and companies in order to address the changes required in this new stage, without affecting the important content of the existing contracts.

Finally, Guelar informed that on May 18th, the Minister for Foreign Affairs and Worship, Susana Malcorra, and Tourism Minister, Gustavo Santos will be arriving to Beijing. "They will make very important announcements, which will certainly be welcomed by your government," said Ambassador to the Chinese President.

While the Ambassador Guelar has been the Head of the diplomatic mission of Argentina since March 19th this year, that day he delivered his credentials as Ambassador Extraordinary and Plenipotentiary to the highest level of chinese administration.