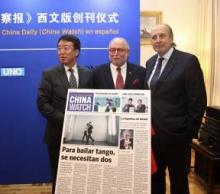 On May 9th, was held in our Embassy the launching ceremony of the first edition in Spanish of China Watch, a publication by China Daily. Thus, Argentina became the first South American country to publish this supplement.

On March 15th were distributed, in our country, 150000 copies of the first edition of China Watch in Spanish, together with El Cronista and four papers from Grupo UNO. On that occasion, the Ambassador Diego Ramiro Guelar published an article in which he stated that China has become the second largest trading partner of Argentina at a global level, and that the bilateral relationship has been elevated to the level of Comprehensive Strategic Partnership. The Ambassador expressed that China Watch would improve the cooperation in all areas between the two countries.

At the ceremony in Beijing, Ambassador Guelar, Editor in Chief of China Daily, Gao AnMin, and the President of Grupo UNO Jose Luis Manzano, addressed the audience (among the public not only diplomats and journalists of both countries, but also in attendance were the governors from Cordoba and Santa Fé, Martin llaryiora and Carlos Fascendini, at the head of a mission composed of institutional and commercial officials, technicians and entrepreneurs of their provinces).

Gao AnMing said: "Although China is a country that remains remote and mysterious for Latin America, the desire and the need to know the Asian Giant will consolidate the basis of future cooperation. In this context, we can say that China Watch in Spanish was born in a perfect moment “.

China Watch is published and distributed with the Washington Post and the Wall Street Journal in the United States of America, The Daily Telegraph of United Kingdom; The Handelsblatt in Germany; The Nation of Thailand and The Jakarta Post from Indonesia, among others.