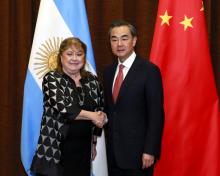 President Mauricio presented on the 20th of May the nomination of Susana Malcorra to the position of UN Secretary General, highlighting that her diplomatic experience will allow her to bring “creative solutions” to the challenges that the organization faces.

“In submitting this nomination, the government of Argentina is convinced of the experience and capabilities of Ms. Malcorra, which will enable her to excel in the role of Secretary-General to the United Nations”, wrote President Macri.

The President commented that the Minister for Foreign Affairs & Worship - who is 61 years old, was born in Rosario and graduated in electronic engineering at the National University of Rosario - has a long and distinguished career in both public and private sectors, including various positions at the United Nations over more than a decade.

At the UN, Malcorra fulfilled a number of roles, including Deputy Executive Director of the World Food Programme (WFP), and Chef de Cabinet to the Secretary-General.

She has been involved in the 2030 Sustainable Development Agenda since she first joined the UN, and has the experience and knowledge to promote its implementation across the globe.

The President underlined that the United Nations is today facing “great challenges in an ever more complex world”.

“In this context it is necessary” to implement solutions that guarantee “peace, security, development and human rights”, he added.

He also called for partnership between governments, the private sector and civil society under “an integrated and more global vision.”

“The dual objectives of prevention and sustainability must be the cornerstone of all agendas brought forward by the Organization”, he said.

If elected Secretary-General, Malcorra will be the first woman to assume the role since the UN was created in 1945, and the second Latin American after Peruvian Javier Pérez de Cuéllar (1982-1991).

Her nomination complements the Argentine government’s foreign policy that looks for more global integration, promotes inclusive dialogue, and respects the diversity of interests and approaches.

It also demonstrates the value of multilateralism as a form of State-to-State relations, with common rules, obligations and essential goals such as peace, progress and socially-inclusive development.