June 10th: Day of Affirmation of Argentina's Rights over the Malvinas, South Georgias and South Sandwich Islands, and the surrounding maritime areas. 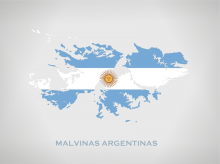 On June 10th we commemorate a new anniversary of the creation, in 1829, of the "Political and Military Commandancy of the Malvinas Islands and the islands adjacent to Cape Horn in the Atlantic Ocean".

Its creation was the affirmation of our sovereignty which we exercised since our emancipation over this territory and other Islands in the South Atlantic, as legitimate successors of Spain.

During those years, legislation was enacted from Buenos Aires and legal and administrative structures were established that consolidated the full exercise of our sovereignty, promoting the development of commercial activities, the settlement of population and the establishment of a local government on the date we commemorate today, with Luis Vernet being appointed Governor.

This effective exercise of sovereignty was interrupted on January 3rd 1833, when the United Kingdom expelled, through an act of force, the legitimate Argentine authorities and the population that had settled there, disrupting our country's territorial integrity. This act of force has never been consented by any Argentine government, and since then, the islands are the subject of a sovereignty dispute with the United Kingdom, recognized by the United Nations through Resolution 2065 (XX) of the General Assembly.

Therefore, recovering the full exercise of our sovereignty over the Malvinas Islands, South Georgia Islands, South Sandwich Islands and the surrounding maritime areas, respecting the way of life of its inhabitants and in accordance with International Law, constitutes a permanent and non-renounceable objective of the Argentine people, as established in the First Transitory Provision of our National Constitution.

Since 2016, the Argentine Government has promoted a constructive relationship with the United Kingdom that has allowed us to make progress in areas of mutual interest in the South Atlantic, which reflects our full disposition to engage in a substantial dialogue inclusive of all issues.

We are convinced that this climate of dialogue will also generate a proper framework for the resumption of negotiations on sovereignty, in the terms established by the resolutions of the United Nations and its Special Committee on Decolonization.

This aim is shared by our region, as well as by numerous multilateral fora such as MERCOSUR, the OAS, the G77 plus China and the Ibero-American Summits, where on many occasions we have received support in favor of the resumption of negotiations to find a definitive solution to this protracted controversy.

Argentina is committed to the peaceful settlement of disputes and multilateralism within the framework of a rule-based international order. In this regard, we trust that through the works of the General Assembly of the United Nations and its Special Committee on Decolonization, which were recently reasserted by the International Court of Justice, it will be possible to move towards the goal of eliminating colonialism all over the world and in all of its forms, including the Malvinas Question.

On this significant date for the Argentine people, we reaffirm once again our sovereignty rights over the Malvinas Islands, South Georgia Islands, South Sandwich Islands, and the surrounding maritime areas, as they are an integral part of our national territory.